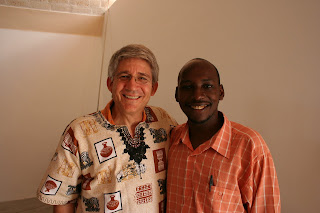 We truly met some extra ordinary people on this trip.

One of them is a young man named Onesimus. The team from Crossroads met this young man two years ago. I understand as a result of being at the conference then that the Lord opened up some doors for him to receive further biblical training.

Words that describe him are bright, quick to laugh, warm-hearted, generous, and eager to encourage others.

He wasn't with us the first day because he is single. But we needed additional translators, so word got back that we needed him and that the team would love to see him again. So I believe he arrived at the end of the first day. And anyway, our new African friend Erick didn't want to be the only single guy in the room. They seemed to strike up a nice friendship over the week.

At one point I asked Onesimus how he became so good at translating. He told me that many years ago, must have been a teenager or early twenties, that he was personally hungry to hear from teachers from other places. So, he started inviting them. He had the best English skills in his church so he was it. He became the translator. He was smiling from ear to ear the whole time he was telling me. He is a young man hungry to learn.

I also observed that each of us had testimonies of being encouraged by Onesimus. It kept coming up in conversations at dinner. Each of us sharing what Onesiums had said to one of us that day. He was very articulate and enthusiastic about the need for marriage conferences in Kenya. He was genuinely pleased to be learning this material before entering into marriage.

On the last day, I asked Onesimus, "What is next for you?" He paused for a minute and then cautiously said, "I think its missions, but I don't know where." Immediately I said, "How about the United States?" He smiled and stepped back a bit. My comment had defintely taken him by surprise. Then he asked, "Is there was a program for that?" I replied, "I have no idea but you could certainly be the first Kenyan missionary to the United States." We both agreed it would be a good thing to pray about.

I don't think Onesimus would have a hard time getting a group of jadded Americans to listen to what he has to say about Jesus Christ. There is that much light coming from that young man. Can't wait to hear what God's plan for Oneisums turns out to be...
Posted by Cheri at 3:12 PM