My biggest challenge in Kenya. 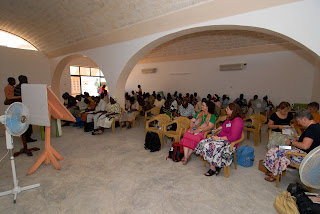 As we prepared for this trip I kept having questions about women teaching men and women together. A big chunk of my time in seminary got spent on the various aspects of this question. I have concluded a couple of things. I am willing to go where I am welcomed to teach but I am not interested in being a stumbling block to those who do not understand or value the need for women to be teachers of men and women in the church. God knows that if He wants me in that kind of a room teaching, He will have to figure out a way to make it very clear to me that I am required to be there out of obedience to Him.
So for this trip, there were twelve sections to the marriage conference we were leading and seven teachers. Merrikay who is single decided to teach a class on parenting. That left the six of us with two classes each to teach. We were encouraged to team teach because Paul and Suzi had done so two years ago and it had made a big impression on the people at that time.
We also prayed that we would each be teaching about something that was and has been important to develop in our own relationships. It was really amazing to see how that worked out.
As Dave and I began to prepare, we decided it was best for us if we each prepared two sections but invited the other to insert a story or observation from the other persons perspective during our presentations. Dave and I took Communication part 1 and 2 and Conflict Resolution part 1 and 2. I focused on Communication which came into the schedule on Tuesday. But Dave wasn't set to lead his sections until Wednesday. The consequences of this for me, had not really occurred to me before Sunday. It hit me kinda hard that I would be going to teach before Dave. We'd been introduced as a couple on Monday but still I wasn't to thrilled. Dave assured me a couple of times that it was okay and not to worry...hakuna matata.
Finally, I gave up worrying and accepted that this was the way it was meant to be.
When it was my turn to help Dave with his section, we realized that he had ended up with the most fill-in the blanks in the workbooks we provided. For communication purposes, communication from us to the participants, we had discovered on Monday that the fill-in words needed to be written down on a flip chart. This simple act made it much easier for everyone to get their blanks filled in. Dave doesn't like to write at all. So he was very relieved when I offered, as my part, to simply stand there and write downs all the words. In Dave's first session, I don't believe I spoke at all. At the end of that day, I was struck by the contrast. In the first session, I was the primary teacher. In the second I was totally content even happier to be in the background. I could live out both roles in contentment. It seemed important what Dave and I had modeled together.
The other couples truly shared their talks more. There was a lot of give and take throughout their presentations which was also a great model. I'm hoping on the evaluation forms there will be some comments about the way the teaching was presented.
For all the men in my life who have indicated that they value listening to a female perspective, I want to say thank you. To my Heavenly Father who orchestrated events, such that the first time I would teach in front of a mixed group, that it be in Kenya, Africa. Well, I am beyond grateful. This group was so receptive, loving and respectful to our entire team. And it all took place in such a memorable setting - in the midst of a dream come true for me.
I am so grateful for God's involvement in my life. He keeps making it easier and easier to trust Him.

Interesting perspective on women teaching. That is a topic I've been grappling with myself of late.