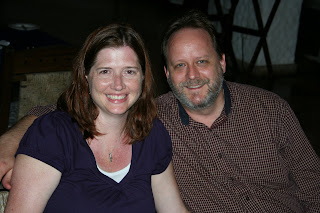 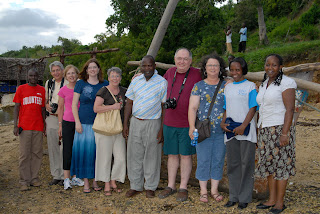 Last night the team reunited minus Merrikay who is still in Africa to be interviewed by John Newton. He's putting together a short video about our trip. Not sure when it might get shown. May just go in the archives to use before future teams leave on trips.
I don't think any of us on the team where terribly excited about being in a video. I think Dave compared it to the joy of a root canal. But as always there are unexpected blessings in doing what you don't really want to do. John interviewed each couple for about 10 minutes each. We sat and listened to each couple giving their responses. It was fun and heart warming to hear how each of us was impacted by "Impact 2009"... and to hear our hopes and prayers for the couples we left behind.
All of this has had me reflecting on what God has brought about in my life through this trip. My parents went on short-term missions trips when I was a kid. Since then, I have had the bug. My first opportunity, for a mission trip out of the country was crossing the border from SoCal to Mexico to build homes. It was a youth trip. I went on several It was a great experience but not really what I had been dreaming of doing.
About five years ago, I started to long to be able to go on a trip where I'd be able to do some teaching. At the time this desire began it seemed unrealistic for several reasons. But God did it. He got rid of all the unrealistic reasons and put together a trip for Dave and I to do together as part of a team that just "made sense".
There are a few longings in my heart right now that I'll keep between me and the Lord. But I gotta tell you. What God did before, during and now after our trip to Africa is giving me the courage to believe that if a longing of mine matches up with God's will, its gonna happen. I assure you all of them have obstables that make them seem humanly unrealistic.
It will always mean a lot to me that Dave, Mike, Joye, Paul, Suzi and Merrikay from Crossroads and Rose, Miriam and Erick from ALARM were a part of time in my life when God has given me so much reason to have so much faith!
Posted by Cheri at 9:57 AM