I shared in a previous blog that I had made the decision to have very few expectations related to our journey to Israel.  I consider it a gift from God that He gave me that perspective prior to leaving. It gave me an unexpected freedom. It allowed me to trust Dave’s ability to remember almost everything he hears and my friend Kandy’s passion for writing down everything the guide was sharing with us. My trust was well placed. Shortly after our return our entire crew received a 20 page document of type notes. Trusting their abilities allowed me to enter into things more prayerfully and more visually, which I prefer to listening intently or taking notes. If I missed some details during the day I knew those could be discovered over dinner! And, I was able to share with those that asked what was stirring in me at different locations along the way.

Dave was asked to play some music over the buses speaker system as we ascending in Jerusalem. In addition to music, Steve had some of the Psalms of Ascent read as well. And it didn’t turn out like I expected. Ha!

One of the songs Dave played is by a favorite artist by the name of Fernando Ortega. He has a song called City of Sorrows. Well that wasn’t the mood or the thoughts I had in mind for the ascent. My head was more in the area of amazement over all the people that have made the Pilgrimage to this city over the centuries. I wanted some how to participate with the people who over the centuries have entered into the city in community for various celebrations and to participate in acts of worship.

So when the song, City of Sorrows stuck I got surprised and tried to resist. It didn’t work. Our first stop was at the top of the Mount of Olives. This is what I saw. 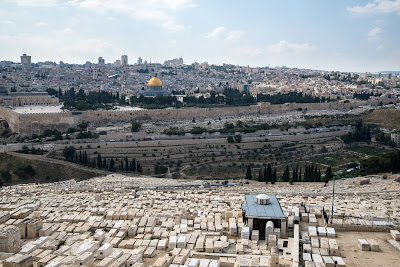 A graveyard… the Garden of Gethsemane… the temple mount…

At one point we have a few minutes to simply look over the view. An idea was forming. This city while very important is not what it will be one day. This city represents so much death. All the battles that have been waged over the centuries related to the control of it were flashing through my mind. I was looking at several locations at once that represent Christ willingness to die in this place. The brutality of His death flashes before me. I’m standing over a vast graveyard. Most of the hill where I am standing is covered in graves… in death. Sorrow.

Next I thought about how often Christians will say that it’s just so amazing that Christ would be willing to die. I don’t understand why He would do it and why that way? In that moment those ideas didn’t resonate with me at all. Of course He was willing to die. When I think of all that has happened in my one little life and then I multiply that times all the people who have ever trusted Christ and what that has meant to their lives, it makes total sense that He was willing. I was grateful for these thoughts because I didn’t want to remain in a place of focusing in on the sorrow experienced in this city.

The next thing that happened is strangely wonderful. Hearts have become significant to me. They no longer represent fluffy romantic love. They represent so much more to me now.  At one point, I was looking out over the temple mount and imaging the Second Temple and for some reason I decided to look up at the sky.  I saw a dark cloud among white clouds and blue sky. The dark cloud was in the shape of heart. I looked at it and brought my eyes down. I couldn’t resist I looked again to see if I had made it up. I looked down again. I looked one last time. And there was more to see. Clouds exist in layers. A wind was blowing across the top of the black cloud and out of the top right corner of it were wisps of clouds made pink by the sunlight. Yes, a pink wispy cloud was coming out of the dark cloud. I’m sorry to say that I was not able to capture that with my camera. I couldn’t bring myself to speak and ask Dave to capture it with his. I was speechless. I was in awe.

Jerusalem is the city of so many sorrows. Much blood has been shed in that place and continues to be shed today. But I, like so many others, have met the One who will one day make all things new including Jerusalem. I’m grateful for His willingness to give up His life for all people. It causes me sorrow to know that there are people today that are unable or unwilling to trust Him. He loves the so much. I am awed that God presented Himself to me in these ways in that place that day. I’m glad I stopped resisting Him when it didn’t match up with my expectations for the moment.

Dear Lord,
Thank you for meeting me in unexpected ways on the Mount of Olives. Thank you for being willing to die and be resurrected so that I can know life in You. This can be so hard to believe and trust. Thank you for loving us even when we’re not responding to Your love. May blind eyes see, may hard hearts be softened and may ears hear something that causes them to mistrust their own judgment when they have concluded that You are not who You claim to be.

Wow! I was blessed by this!